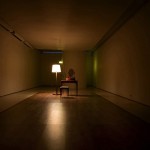 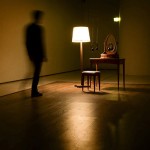 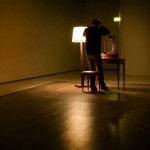 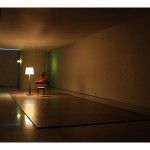 “Mikado”  is a sound installation based on a scene from “Cries and Whispers”, an Ingmar Bergman movie from 1972. Mikado presents a new angle to the original dialogue, the content of which has been modified into an idea about personal transformation. By using “three-dimensional sound”, Rosenström places the viewer/listener in the midst of the narrative, staging a situation in which the viewer becomes an integral part of the work and is confronted with him/herself through the text. The work is four minutes long and is experienced alone.

Hans Rosenström studied at the Nordic Art School in Kokkola in 1999-2001, the Malmö Art Academy in 2003-2004, and the Finnish Academy of Fine Arts in Helsinki in 2001-2007. He is currently based in Helsinki and Stockholm. Recently Hans Rosenström has had solo exhibitions in Takkahuone at Aboa Vetus & Ars Nova, Turku (2012), The Studio at Moderna Museet, Stockholm (2011) and the Galleri Sinne, Helsinki (2010). He has participated in several group exhibitions and festivals, including, So You Say at West Space in Melbourne, Australia (2012), Imagine Being Here Now, The 6th MOMENTUM Biennial in Moss, Norway (2011), The Prague Quadrennial, Czech Republic (2011), Steirischer Herbst, Graz Austria (2011), Baltic Circle, International Theatre Festival, Helsinki (2010) and Street View, MAP – Mobile Art Production, Public Art Exhibition in Gothenburg, Sweden (2010)