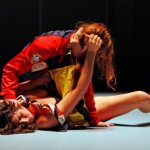 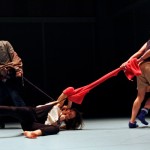 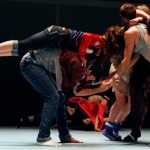 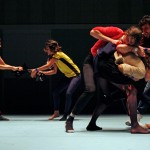 Schwalbe Cheats is the name of the new performance by the Schwalbe collective, which is its third production so far. In Schwalbe Cheats, eight performers are engaged in a (physical) game live on stage. According to the dictionary a game is “a competitive activity involving skill, chance, or endurance on the part of two or more persons who play according to a set of rules, usually for their own amusement or for that of spectators.” However, in this definition lies a paradox: it suggests that competition and agility go together with relaxation. Then how can it be that there are countless examples of people engaged in competitive game play whose emotions flare up so much that they attack skilful fellow players and, as such, lose their grip on reality?

Schwalbe shows the game as a framed reality: a free zone in which different rules apply than those that we know from everyday life, but where nevertheless ‘real’ emotions occur. Emotions such as fear, anger, betrayal, guilt, heroism, fanaticism and frustration come out during the game and are subsequently questioned. With this performance Schwalbe wants to ask questions about civilisation, humanity and instinctual drives to experience the so-called ‘inhumane’ side of the human and share with the audience. To what extent is play the struggle that we stopped performing because of our civilised nature? To what extent are we still led by primal urges and survival instincts?

Schwalbe’s performances balance on the edge of theatre and performance. Schwalbe seeks for ‘authenticity’ on stage: subtle, physical, uncompromising and fully devoted. The attempt, which leads to action, constitutes the performance. The course of this attempt will be different every show. By staging the actual situation, Schwalbe wants to include the audience more directly in the subject of the piece.