Mart Kangro (EST) “Talk To Me” 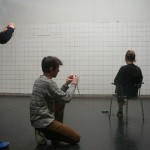 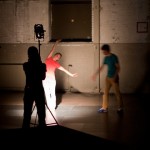 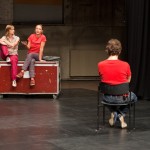 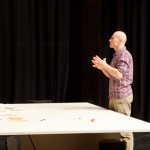 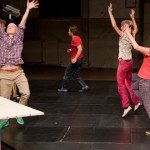 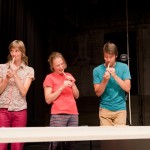 “My mother, my father, my aunts, my four sisters – they are my family… My daughter? My daughter is not my family she is my daughter… I don’t know about my boyfriend. Boyfriends may come and go. There’s a bigger trust needed inside the family… My boyfriend is just my hobby…”

“Talk to Me” revolves around the problematics related to the performativity.

On top of zigzaging across the osmotic line separating the character and the performer as well as humorously playing with the duality of addresser and addressee it tries to describe the microcosm of an individual.

Performances in general are often seen as games with certain codes which seemingly stand apart from our everyday life. We often think of the time spent in the theatre as being in another fictional world. How much do we believe in what we see on stage? Who is talking to us? A character of a play or a person who happens to be on stage?

“Changing a word into a movement and a movement slipping into a word becomes a unique final result. “Talk To Me” rolls in a natural rhythm, forming a patchwork quilt consisting of strips. Performers will part to a persons, everyone developing his own path. “Talk To Me” is also very melodical. After the performance ends, it is not clear to the audience, what is it exactly that we are dealing with – Another person? A world? An art? But without a doubt it is something eager, tender and caring.”

Mart Kangro is one of the most internationally known Estonian choreographers. After graduating as a dancer and choreographer from Tallinn University he was for a few years dancer at the Estonian National Opera before committing himself solely to choreographic work in which he often is on stage himself. Kangro’s choreographical language is very much about precicion and clarity of movement, he has collaborated extensively with German choreographers Thomas Lehmen and Christina Ciupke. Kangro has also worked together with the Estonian musician and sound artist Taavi Kerikmäe the group Ansambel U investigating the role of the performer in live music. He lives and works in Tallinn. His works from recent years include “longer than expected” (2007), “Winners vs Losers” (2008) (both with Christina Ciupke), “Can’t Get No / Satisfaction” (2009) and “Talk To Me” (2011).

Performance is in English.